Last month I had the amazing opportunity to meet and interview well known designer Jonathan Adler in his SoHo loft.  In choosing what to ask the “Happy Chic” designer with stores across the US, his third book in production and having collaborated with an impressive list of big name companies, I knew that I wanted my questions to resonate with the people who read my blog on a regular basis and have been HUGELY supportive to me over the past few years.
Having an Etsy shop and recently quitting my full time job to start a boutique PR Firm I wanted to keep the interview real and talk about fears, failures and successes in the pursuit of following ones creative passions.  I wanted my questions to motivate you, my readers (and truth be told, inspire me) to kick start that creative career or act on that crazy idea you can’t seem to shake from your head no matter how scary it may seem.
Interview with Jonathan Adler

Stacy Wichelhaus: At 27, you vowed never to have a “real job” again.  What led you to this leap and how did you overcome your fear of failure to do this?
Jonathan Adler: Lucky for me, I didn’t have to make a choice.  I once burnt down an office building from a kiln fire and I got fired from every job I ever had.  I was totally unemployable, so I knew I needed to figure this out.  Sink or swim.  I honestly think there have been so many times along that way that I should have sunk but because there was a sheer sense of panic to make this work I did.
SW: Have there been any words of advice given to you early on in your career that have stuck with you?
JA: When people ask me for advice I usually say that there is a lot to be said for “panicked stick-to-itiveness”.  I look at someone like my husband (Simon Doonan) and I who have both been doing what we do for quite some time.  Neither of us has bounced around. He has been at Barney’s as a window dresser for 30 years, and I’ve been here for 18 years.  I think there is a lot to be said for staying the course.
SW: How did you handle your nay sayers and doubters?
JA: When I was in school, I had a pottery teacher who I went to for advice and told her that I wanted to be a potter and she told me that I had no talent and couldn’t do it. I think it’s good to have someone who doubts you.  Having the support of your friends and family is also important.  My family has helped me get through some really tough times.

SW: Did you ever have a moment early on in your career where you were asked yourself “what the heck am I doing”?
JA: Every day. Every single day. I can’t count the number of times I would just lie in the fetal position on the bed.  The numbers of screw ups that have happened over the course of my career are of such monumental scale and capacity.  I’ve had so many of those terrible moments.  I think doing your own thing, especially when it’s as weird a thing as a creative business, it’s a preposterous undertaking and you have to be slightly delusional and you need to fully believe that something as crazy as what you’re trying to do can work even though there is a possibility that it may not.  You need to be incredibly resilient and hard working.  But don’t take yourself too seriously and don’t put too much pressure on yourself.  I wish people weren’t as hard on themselves as I was on myself.
SW: You’ve collaborated with a wide variety of industries.  How has this helped you to expand as a designer?
JA: For me, my whole career has been improbable and I would say that I’ve always welcomed design challenges.  Collaborations are something that people are doing these days.  Once I understood what I was trying to say with my work, I thought that happy chic idea could be applied to so many areas and it made a lot of sense to take my design vocabulary and the spirit of what I do and spread it out. I love designing, it’s what makes me happy and I ALWAYS welcome a challenge!
SW: You and your husband, Simon Doonan are both creative.  How do you fit two creative people into one household and where does Liberace (their Norwich Terrier) have a say?
In Simon and my case, we’ve been together a very long time.  We do things thoughtlessly and naturally and we’ve always been on the same page with one another.  I feel that in a way, creativity is mostly logic anyway.  It takes work and analysis and I think Simon and I both fully understand that. He’s a window dresser and a writer and you know the saying ‘writing is rewriting’?  I think it’s so true.  I can have an idea in my head of what something is going to be and then when I get it back it’s a disaster. So it’s the same thing.  If you’ve seen that episode of the Real Housewives of Atlanta, it’s like when Sheree decided to start a clothing line and when she got the first prototype back she was like “this isn’t what I thought” and I’m like “hello, welcome to any design undertaking.  It’s never what you think it’s going to be it’s always a disaster.  It’s only on step 10 after you’ve been rigorously analytical and covered all the issues that anything can come to fruition as you hoped or imagined that it would.  Once you surrender to that idea in whatever you do, whether it be medicine or a creative pursuit that’s when you end up being successful and that’s something that both Simon and I agree on”.  And Liberace is an adorable idiot, he’s really dumb but oh so cute! 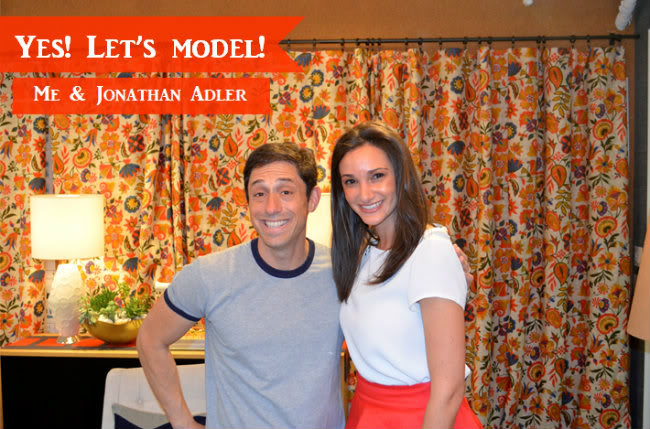 *When I asked Jonathan if we could take a picture together he said: “Oh yes! Let’s model!” – Loved that = instant smile on my face!